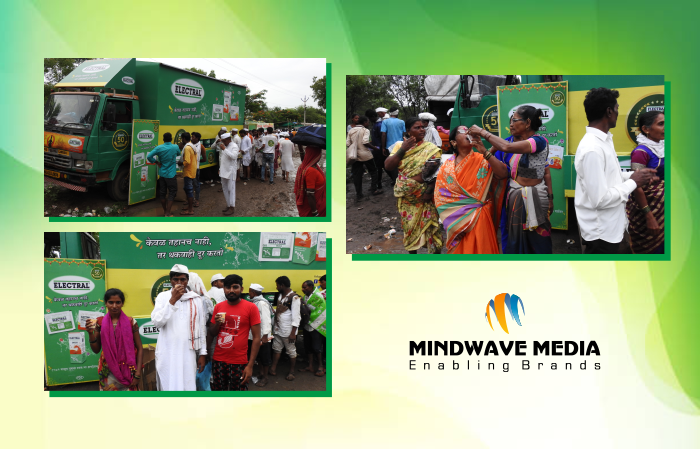 FDC Electral took up a noble initiative of refreshing the devotees with Electral at the Pandharpur Wari 2022, the Biggest Rural Event of Maharashtra which started on 21st June & ended on 10th July (Ashadi Ekadashi).Lakhs of devotees came to seek the blessings of Lord Vithoba at the Vithoba Temple of Pandharpur on the auspicious occasion of Ashadhi Ekadashi, Maharashtra on foot. They walked for 20 days from Pune to Pandharpur to seek the blessings. There are 2 routes to reach Pandharpur- some follow the Alandi route, while some come from the Dehu route.Electral – India’s original rehydration solution engaged with the devotees & catered to them on both the routes. ‘Refreshing Electral Vans’ were set up on both the routes, where in a dispenser that contained Electral reconstituted in water were served to the devotees. The purpose of these vans was to not only quench their thirst, but also to revitalize them after a long and tiring journey on foot- as ELectral’s tagline rightly says- ‘Keval Tahanachi Nahi, Tar Takhvahi Door Karto’. FDC distributed about 10000 cups of Electral on a daily basis to the warkaris.

About Pandharpur Wari: Pandharpur Wari is an annual pilgrimage (yatra) for 25 days to the town of the deity of Hindu God Vitthal. This tradition is more than 700 to 800 years old. Around 20 Lakh warkaris or pilgrims join this procession on foot, which is for 20 days.

Mr. Rajesh Radhakrishnan, Chief Marketing Officer and Co-Founder, Mindwave Media highlights “We are helping brands like Electral (From FDC) to achieve their objective of Brand Engagement along with community betterment. Purpose-driven marketing is a great way to find your audience and hit the right chord for your brands. We recorded an unbelievable response for the product.”

“Only a life lived for others is a life worthwhile, this saying holds true for Electral too. Pandharpur Wari is probably the biggest festival in rural Maharashtra. We got this unique opportunity to do ‘seva’ to the warkaris during their long journey of faith & at the same time, firmly establish our communication to warkaris via sampling of Electral right when they needed it. Our vans tried reaching out to as many devotees we could & we are overwhelmed by the response we have got from the entire event”- says Mayank Tikkha, AVP, Business Development & Commercial Excellence- FDC Limited

How using Digital Technologies will ensure a Successful Digital Marketing Campaign for your Brand in the Coming Years?